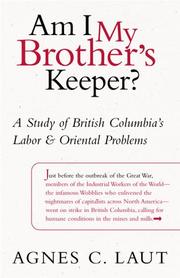 Am I My Brother"s Keeper? by Agnes Laut

Based on recently declassified documents and more than two hundred interviews, I Am My Brother's Keeper tells the story of the more than one thousand Americans and Canadians, Jews and non-Jews, who fought in Israel's War of Independence. This is a story about men like Rudy Augarten (shown on the front cover), who interrupted his studies at Harvard to fly for Israel. I Am My Brother’s Keeper, Not My Brother’s Killer. Buy the Book; About the Book. Malachi Jackson has a choice. He can go to college and get a good education, or he can join the neighborhood gang. If he joins the gang, he can make some quick money, but there are consequences for joining a gang. He ends up seeing his life come to full. Let's us be our brother keeper We’ would like you to partner with us with a generous monthly gift, so we can continue to change the lives of those who are incarcerated. Many have children who they love. "I AM my brothers keeper". 14K likes. Sharing the Truth for a more perfect Nation and keeping it REAL for Gods People. #ObamaCares - forever #MyPresidentFollowers: 15K.

My Brother's Keeper is a novel by Marcia Davenport based on the true story of the Collyer larep-immo.comhed in by Charles Scribner, it was a Book-of-the-Month Club selection and was later reprinted as a Cardinal paperback with a cover painting by Tom Dunn. You searched for: my brother keeper! Etsy is the home to thousands of handmade, vintage, and one-of-a-kind products and gifts related to your search. No matter what you’re looking for or where you are in the world, our global marketplace of sellers can help you find unique and affordable options. Let’s get started! “Am I My Brother’s Keeper?” Am I willing to be broken bread and poured-out wine for Him? Am I willing to be of no value to this age or this life except for one purpose and one alone— to be used to disciple men and women to the Lord Jesus Christ. My life of service to God is the way I say “thank you” to Him for His inexpressibly. My Brother's Keeper is a vibrant, welcoming Christian ministry in Easton and Dartmouth, Massachusetts which delivers furniture and food to local families in need.